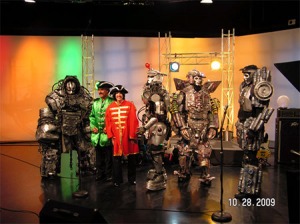 In October of 2009, The Killer Robots appeared on Daytime TV, a nationally syndicated morning show. After receiving a request by an old friend of Mike “Max” McGowan to appear on the show, we began work in anticipation of our television debut. Our manager Ross “Captain Zonar” Parker drilled us through many rehearsals of our chosen single, the Killer Robots “Theme Song.” When not practicing, Samuel “Strobo” Williams set about constructing a large robot for Charles “Trog” Harris to fight while the rest of us performed our song.

The fateful day arrived and we set out for Tampa in the evening so that we could make it to the studio on time in the morning. The production was exciting and surreal.  We shared a dressing room with several angry looking dogs in Halloween costumes (please see video below). The pets were really nice though and we traded war stories about the travails of show business. 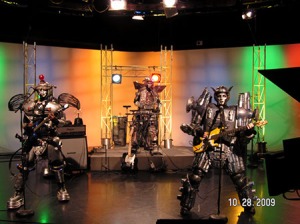 The performance finally arrived and we blasted through our set. We were a little excited though and came in a little too quick. The producer came out and asked us to stretch it out. We went for another take while Trog demolished the giant robot costume worn by his brother, Mike Harris.

After we were finished, the producer hurried out of the control room and exclaimed, “That was so horrible it was amazing!” I laughed and explained, “Our manager tells us that all the time!”

It was a great experience and the production team seemed to be having fun with all of the strangeness. Our manager, Ross was amazing and moved around the studio like a tornado keeping everyone updated and our performance on a smooth and steady course. Ross unfortunately passed away a year later after a long fight with cancer but I will always remember his raucous laughter and the upbeat energy he brought to that day.

Here’s the clip from the show: