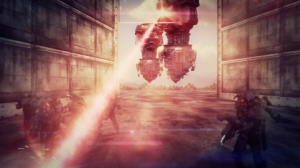 Here’s a cool interview by Kirsten Nelson of Rogue Cinema about the Killer Robots new movie:

Aside from that, still at work on the new KR movie. Currently in the middle of tons of rotoscoping for Strobo’s footage. His legs keep disappearing so there’s been quite a bit of layering and patching.

Also making quite a bit of headway with miniatures. Having built the majority of required models, they’re currently scattered all over the house awaiting paint jobs and filming. Yesterday I was able to shot some footage of the Towerbots – 3 story tall machines built to annihilate unwelcome visitors to the planet Vidya. Now working up the motivation to film some Galaxon battle-cruiser shots.